In celebration of fifty years of status as a City, this year Oyama is staging an original opera - Oyama Monogatari, or "Tales of Oyama." The long history of this area has been compressed into a vignettes of two eras in its past: Acts I and II are set in the Muromachi era (around AD 1180), and feature Yasuko, a famously influential lady, and Act III is set in the Edo period, around 1630. Whereas the first two acts are basically History, which is the same everywhere (Important people plot against each other, have battles, and actually seem to enjoy going off to do more killing), Act III is more a glimpse of everyday life at the beginning of the Tokugawa Shogunate. In Act III Scene 1, we get all the chorus, including children, on the stage for the "Snake Festival" (Jamatsuri), still held today, just down the river at Mamada. The plot of this act centres around True Love between two commoners, Shôkichi, and O-kyô, his girl - sure enough, in Scene 2 family opposition to this match is overcome in a public "Conference" (Oyama hyôjô). We are reminded that it was at Oyama that Tokugawa Ieyasu (the first Shôgun), on his way north to Aizu-Wakamatsu, make a strategic decision that was to change the course of history, turning round, and marching west to the Battle of Seki-ga-hara, where he clinched the power struggle that put the Tokugawa dynasty in place. The important point (for us) is that he did this after consulting all his accompanying commanders; in like manner, everyone is asked what they think of Shôkichi, and O-kyô. Of course, being an opera, approval is total, and the union is blessed with parental approval and public recognition.

Not in costume, but the principals in particular are encouraged to wear kimono. There are two different people playing many of the roles, taking one performance each. Here both red kimonos are Aya-hime, the love interest of the first two acts. 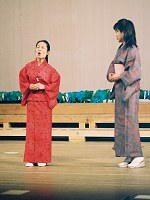 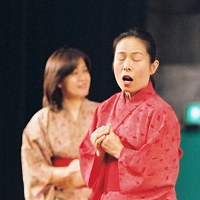 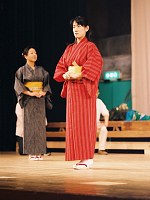 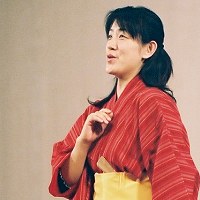 Note the male attendant's pose, "kneeling to attention". I found myself able to maintain this position for about 30 seconds, before searing pains came up my leg. Can the old days really have been so harsh?

Act III - The chorus feature prominently as "passersby", and I've been given the role of gaijin, a wandering Dutchman. This isn't strictly very plausible from a historical viewpoint, but I decided to model myself on Kaempfer, one of the original "Plant-Watchers", who is famous for going round sketching plants and things. So one rehearsal I used a camera instead, and here are the snaps...